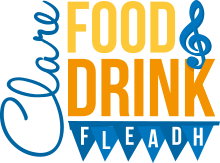 Winner in 2019, the first year of Clare Food & Drink Fleadh, after an enforced Covid-led break, the Cocktail Competition was back this year with a flourish and was won by reigning champ Keegan Drohan of Brogan’s Bar..

The brief was simple – we asked contestants to be inspired by County Clare.

The organisers said they tasted fantastic cocktails using  Clare ingredients from Pigs Elbow Gin and J.J. Corry Whiskey from Cooraclare to Kambocha made by Hurst Botanicals in Clarecastle, to cocktails infused with Anam coffee from the Burren.

Head judge Maeve Eustace said, “We were blown away by Keegan’s mixology skills and his art of telling the story behind the cocktail.  But, most of all we were blown away by the unique taste. Full marks to Keegan on his fantastic all round cocktail making skills,

This week, the judges presented Keegan Drohan with an engraved winners trophy and a Clare Gift Card valued at €100.

Keegan has already confirmed for Clare Food & Drink Fleadh 2023, he will swap his contest role for that of a head judge of next year’s Cocktail Competition.  We look forward to that!

No doubt, this cocktail weaved a spell on the judges!